"2022 has been a year of hopeful and tumultuous activity for child care in Canada, as well as for the Childcare Resource and Research Unit. The child care community has been madly busy, as community advocates and allies, service providers, researchers, and government officials alike have scrambled to keep up with the almost continuous child care developments set in motion by the historic 2021 federal budget. In 2022, the process of building the Canada-wide universal child care system for which we’ve worked so long began in earnest and the first results began to be visible.

As the winter holidays are almost here, we review 2022’s key child care developments, then recap some of the Childcare Resource and Research Unit’s activities. Most of all, we take the opportunity to send friends, colleagues and child care devotees everywhere our warmest, heartfelt and very best wishes for peace, health, prosperity, equality and continued progress toward a high quality child care system in the coming year.

A memorable year for child care

Thirteen agreements—and lower parent fees. Before 2022 began, almost all provinces and territories had completed agreements with the federal government, with some fee reductions beginning early in 2022. The last province to finalize its agreement with Ottawa—Ontario—did so at the very end of March 2022, unlocking parents’ access to substantially reduced fees. Announcements and media about fee reductions came non-stop throughout the year—contested by some operators but welcomed enthusiastically by most service providers, parents and advocates. Thus, child care transformation was demonstrably underway in 2022.

But what about the endangered child care workforce? The initial focus on fee reduction highlighted the other key elements of child care transformation. As reduced fees bumped up demand, recruitment and retention issues deepened and it became even more obvious than ever that a thriving child care workforce is crucial to the success of the Canada-wide child care plan. 2022 saw a stream of provincial/territorial child care workforce-related announcements including wage enhancement, recruitment and retention initiatives, and the first wage grids. The child care community connected the dots between better pay, better quality and better access with a Canada-wide Day of Action on November 30th, led by Child Care Now.

And “accessibility”? How will child care grow? It’s no surprise that demand for child care is rising as fees fall. Provinces/territories have committed to adding 276,400 new (net) spaces in the next few years. To make this happen, we need sufficient numbers of qualified educators, capital funds for quality facilities, and publicly led expansion strategies so that child care develops where it’s needed. The 2022 federal budget’s Early Learning and Child Care Infrastructure Fund was encouraging. Although far short of what’s needed, these are the first federal funds earmarked for child care capital since the 1980s. While some jurisdictions’ Action Plans include developing not-for-profit expansion strategies, none were yet fully operational in 2022. The ambitious child care plan’s success will hinge on whether the next year sees workable public expansion strategies everywhere in Canada.

And finally, the long-awaited legislation was tabled in the House of Commons on December 7 by federal child care Minister Karina Gould. The “Act respecting early learning and child care in Canada” takes a rights-based approach and will provide the high-level framing of Canadian ELCC for years to come. It includes the authority for the National Advisory Council on ELCC announced two weeks ago.

All in all, it was a memorable year for Canadian child care.

The Childcare Resource and Research Unit continued to work on multiple levels with colleagues across Canada as the universal child care system began rolling out. In May, the CRRU offices moved from our beloved digs at 225 Brunswick Avenue when the building was sold for redevelopment. We were thrilled to be offered the top floor of 32 Heath Street West by the Canadian Mothercraft Society. The heritage building at Yonge and St. Clair is the home of Mothercraft’s original infant/toddler/preschool centre and other children’s programs.

During the last year, we said goodbye to two valued team members, Rachel Vickerson and Sophia Mohamed, who carry on child care policy and advocacy work in their new positions, and welcomed Patrícia Borges Nogueira (who had come to CRRU as an intern) half time and Matthew Taylor, as researchers. They, with Martha Friendly, Tegan Thơ Nguyễn and Billie Carroll, our long-time webmaster located in British Columbia, make up the current CRRU “team”. We were joined in the summer by Lin Velasco and Dakota Cherry, Summer Canada Jobs interns, with Jane Beach and Barry Forer playing key roles in Early childhood education and care in Canada 2021. 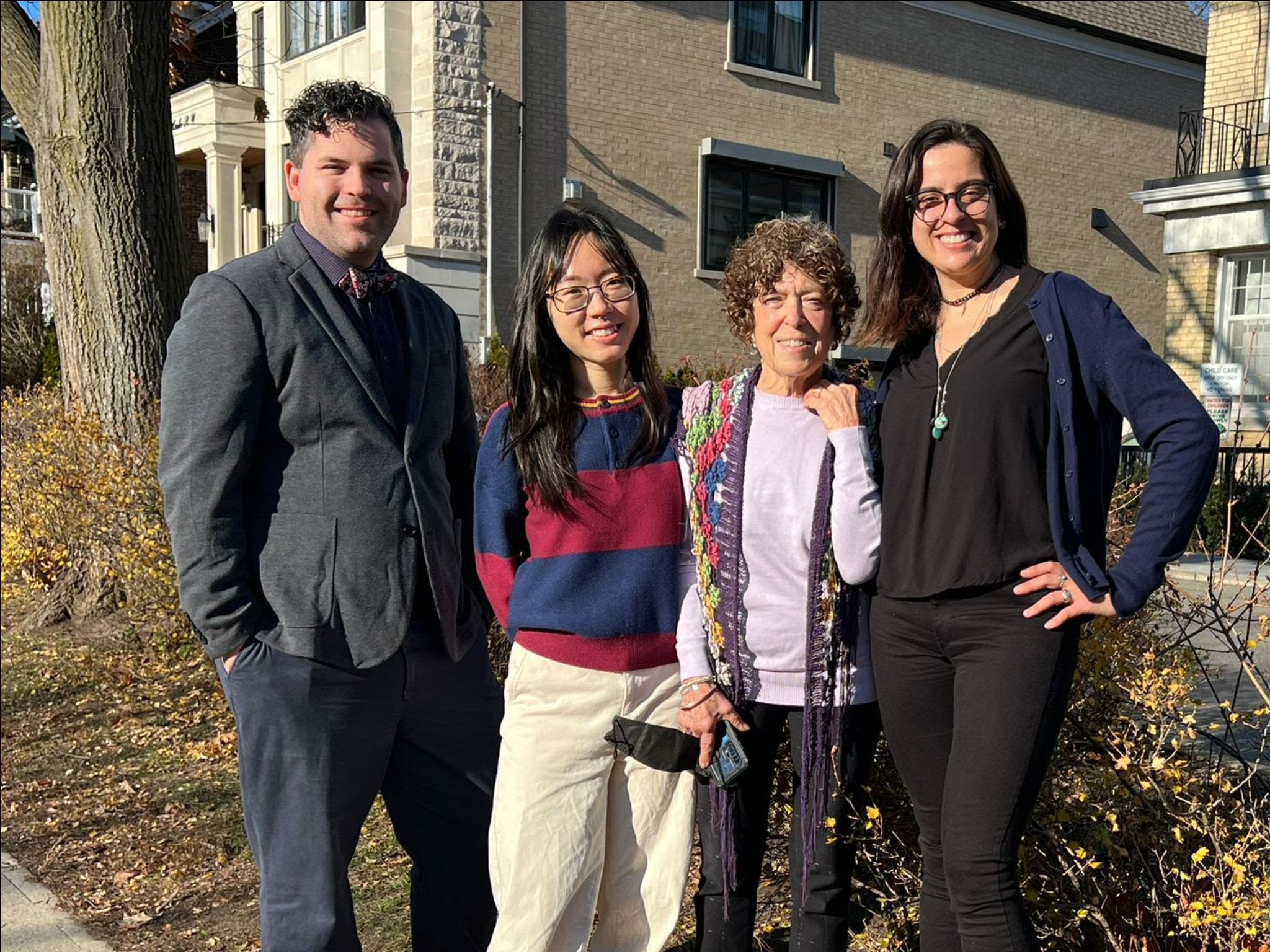 In 2022, in addition to working on the 13th edition of Early childhood education and care in Canada (to be published early in 2023) CRRU was one of the organizers of What now for child care? a two day policy symposium for researchers, Indigenous experts and advocates from across Canada in Ottawa in June. We’re currently following up the symposium with a series of public webinars—two are yet to come in 2023. We have also been developing a new “knowledge transfer” resource on the CRRU website to provide curated information relevant to implementation of the new child care system; it will be launched in early 2023.

We published several new reports and commentaries including one year later follow-up to our 2020 survey on the impact of the COVID pandemic on licensed child care across Canada. We also developed and published a series of eight short papers, Moving from private to public processes about how child care services can be expanded to move toward greater, more equitable access—an issue that has become pivotal in Canada’s commitment to build a universal child care system. In November, CRRU published a summary of selected elements of the Canada-wide provincial-territorial agreements.

CRRU team members all work with other groups and individuals in advisory roles, as partners, co-authors, fellow advocates and organizers locally, provincially and nationally. CRRU has long engaged in collaborative research and advocacy as a matter of practice. In 2022, we continued to be part of the steering group for Re-Imagining Care/Work Policies, a SSHRC-funded Partnership Grant led by Andrea Doucet at Brock University. We are also a community partner in two other SSHRC Partnership Grants, the Inclusive Early Childhood Service System project (Kathryn Underwood, Toronto Metropolitan University) and Care Economies in Context (Ito Peng, University of Toronto).

CRRU is also part of the Inclusive Child Care for All WAGE-funded project with Oxfam Canada and Child Care Now. It is concerned with the under-representation of women from diverse communities in child care. We also regularly collaborate with the Canadian Centre for Policy Alternatives including (since 2014) an annual survey of parent fees and currently, new research on “child care deserts.”

This year, Martha Friendly was added to Women of Impact in Canada, an online gallery dedicated to women’s achievements, profiling those who have made an impact in politics, art, science and countless other fields (Women and Gender Equality – WAGE). In November, Tegan Thơ was awarded first prize in the Mentorship program organized by Hội Nghiện Việc—a community of working Vietnamese newcomers and immigrants in Canada—for their presentation on advocacy work and career in the non-profit sector.

Finally, the regular CRRU weekly “broadcast” to a subscribed list was put on hold, but will return in a revamped format a little later this winter.

So it’s been a busy but incredibly hopeful year as we continue to aim to fulfill the CRRU’s mandate “to work towards an equitable, high quality, publicly funded, inclusive ECEC system for all Canadians.” In 2022, we can see the first impacts of all the hard work to which so many have contributed for so long—and will continue to press in every way to keep this up in 2023.

Happy holidays to all from Martha, Tegan Thơ, Patrícia, Matthew and Billie."